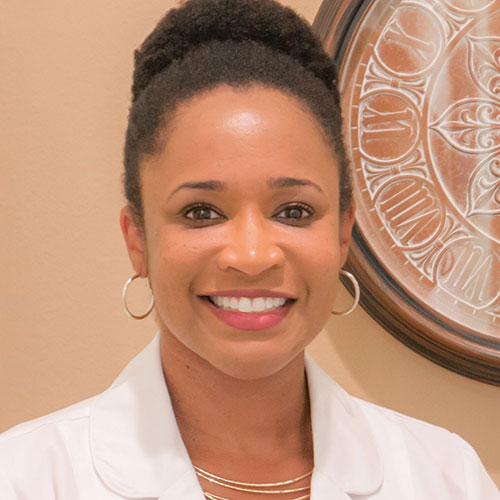 DAYTONA BEACH - When Delicia Haynes, MD, was 12 years old, she felt a lump in her breast while showering. At first, she hoped her adolescent breasts were simply budding. Maybe a lump on the other side would even it out? Two months passed before fear prompted Haynes to confess this unwelcomed discovery to her mother.

"Off we went to see a doctor," said Haynes, recalling hours spent waiting to see a physician. Even without a doctor in the family, helping others via medicine held great appeal to Haynes, and she'd been searching for a mentor. Perhaps this doctor could be her guide? Unfortunately, her daydream fizzled when the doctor barged into the room and unceremoniously ordered her to take off her top.

"For a moment, I sat in stunned silence," recalled Haynes, who did as instructed only after her mother gave the go-ahead nod. The doctor pressed ice cold hands to her chest, scribbled on a chart, and without making eye contact called the lump "probably just a benign fibroadenoma" that needed surgical removal. He told the seventh grader the scar would be minimal, "so if you want to be a stripper when you grow up, that'll be fine," and turned briskly out the door.

"I was devastated," said Haynes, of the seven-minute visit. "I had no idea what benign or fibroadenoma meant. I looked at mom with tears streaming down my face." Haynes' mother, a Baptist deaconess who didn't back down from confrontation, left the exam room to track down the doctor, who by then was in another exam room and was unavailable.

"As I slipped my blouse over my head, I made the decision that I would be a doctor ... the type of doctor I wish I'd had that day," she said.

Armed with an ambitious plan to earn a dual post-graduate degree - MD and MPH (Master of Public Health) - and possibly a law degree for advocacy work, Haynes studied biology and Spanish at the University of Louisville, where she reactivated its Minority Association of Pre-Med Students chapter. Projects included a Boys and Girls Night Out Program and The Buddy Program, which coupled medical students with a chronically ill child. "I brought in medical students as speakers, because it's so important to have a mentor right ahead of you," she said.

During her studies at the University of Kentucky College of Medicine where she received the inaugural President's Award for Diversity, Haynes grew depressed with the daunting, ever-increasing workload. She took time off to regroup, opting to drop pursuing the master's degree, while also realizing she could do advocacy work without a law degree.

"When I returned to medical school, I was very aware of the stigma surrounding physicians and mental health issues," said Haynes, who has been speaking to high school and college groups about the red flags of depression for several years. "When Florida State University lost a second-year medical student to suicide recently, it hit me really hard because it could happen to anybody that doesn't seek or receive the proper help."

From 2005 to 2008, Haynes participated in the Halifax Family Medicine Residency Program and became board-certified in family medicine. She was named the Florida Academy of Family Physicians' Resident Scholar of the Year in 2008. Rather than join a practice or hospital post-residency, Haynes took a bold step and, with no business experience, opened the Family First Health Center in Daytona Beach on Feb. 3, 2009.

"I couldn't afford an office manager at first, so I made friends with office managers that provided help when needed, and I reached out to my colleagues for mentorship," she said. "For their guidance and support, I'm still very grateful."

Haynes methodically built a sustainable solo family medical practice on a traditional model of insurance reimbursement until the fall of 2014, when after struggling "several long and laborious semesters at the school of hard knocks," she received an insurance contract by mail specifying a 40 percent reimbursement reduction for certain services.

"When I realized a third party could make a decision that almost put me out of business, I wasn't working for myself or my patients," she said. "I was working for the insurance company."

The innovative concierge medicine program allows same-day appointments, unrushed doctor time, and telemedicine services. Many prescriptions are offered at wholesale prices. Most minor procedures are covered, such as ear wax removal; others have a nominal fee, such as a $25 pap smear. Vaccinations are guaranteed low rates, $15 for the flu. X-rays start at $25.

Around the same time, Haynes focused on community health initiatives. She began "Cut High Blood Pressure," an innovative program at local barbershops and salons, where clients that typically wouldn't visit a doctor may check their blood pressure. Participant lives have already been saved, including a black man who was shocked to learn his blood pressure was in the stroke range. After verifying the numbers, he was dispatched to a local hospital for urgent care. "For many people, and especially black men, the barbershop is the one place they can let their guard down and speak their mind without consequences," Haynes explained.

Patricia Cadette, owner of Styles 101 Beauty in Daytona Beach, is a staunch supporter of the program. Eight years ago, when she was a seemingly healthy 41-year-old beautician, Cadette suffered a stroke. "Now, even when clients aren't getting their hair done, they stop in to have their blood pressure taken," Cadette said.

Haynes has continued to excel in every direction. In 2013, she became Volusia County's first board-certified obesity physician. In 2014 and 2015, she was listed among America's Top Family Doctors. In 2016, Daytona Beach Chamber of Commerce named Family First Health Center the area's Small Business of the Year, and Daytona Beach News Journal named her among Top Doctors. Earlier this year, she was a Volusia-Flagler Top 40 Under 40 award winner.

"I stopped asking for permission a long time ago," said Haynes, of her out-of-the-box thinking. "It's so sad to me when brilliant people see a problem and have a solution and won't do it because of some sort of bureaucracy."