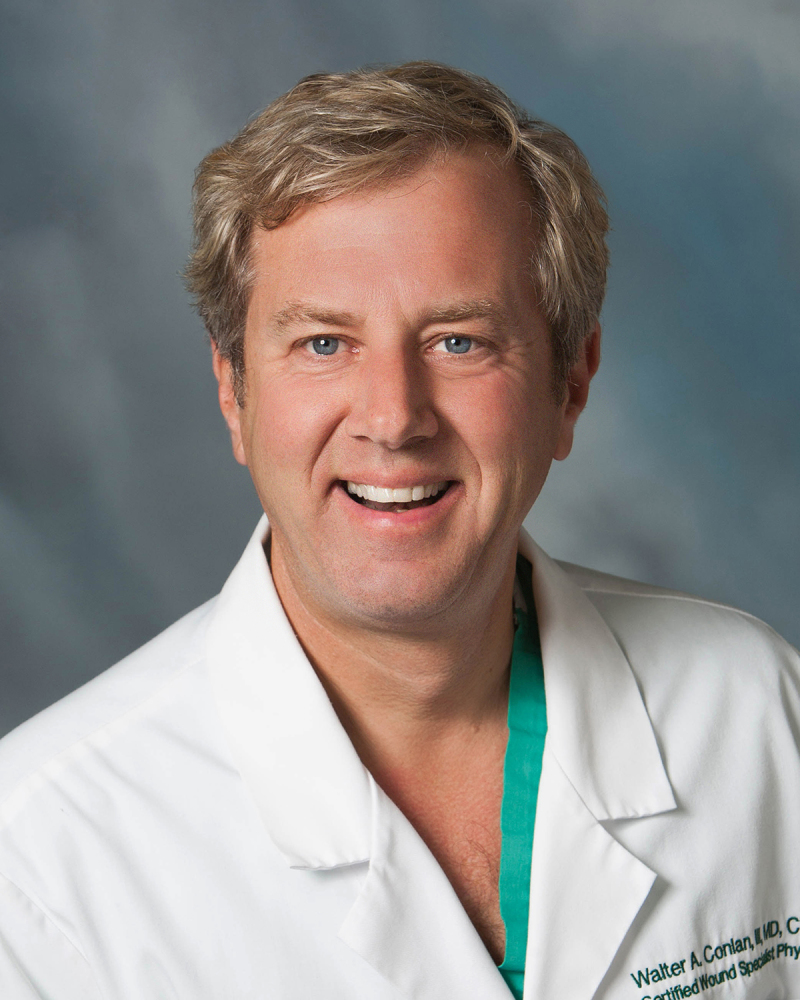 "My greatest goal is to dramatically decrease the incidence of amputation from diabetes," said Conlan, whose practice is comprised largely of diabetes patients with circulatory complications. Most referral patients' wounds are about a month old. "We focus on goal-directed wound healing, going beyond the standards of care. For example, we provide total contact casting for diabetic foot ulcers to take pressure off the bottom of the foot to allow healing."

Ironically, Conlan's focus on wound care wasn't on his radar until late in his academic life. While studying psychology at Emory University, he was mulling plans to pursue a doctorate in clinical psychology when an advisor suggested otherwise. He told Conlan that, quite frankly, he probably couldn't get into the PhD program and should settle on a career in social work.

That advice didn't go over well with Conlan, who ultimately decided to pursue medicine. He aced pre-med classes and toiled an extra post-baccalaureate year of studies before being accepted to Thomas Jefferson Medical College, where he planned to specialize in psychiatry. He chose physical medicine rehabilitation because it combined components of psychology, neurology and orthopedics, a decision reinforced during a short stint at the University of Texas Health Science Center at San Antonio. He completed a four-year residency in physical medicine and rehabilitation at the Rehabilitation Institute of Chicago at Northwestern University Medical Center.

When he married Kristin, a Bradenton native, in 1990, it was an easy decision to relocate to the warmer climate of Central Florida. Conlan, who lost his father at the age of five, had grown up in Pennsylvania with his mother and younger brother, and had tired of the long winters. Besides, Florida represented an ideal venue for his paddle boarding, sailing and surfing interests. His wife's experience at Rollins College in Winter Park influenced their decision to settle down in the Orlando area. It also laid the groundwork for his son, Alex, now 22, and a junior at Eckerd College in St. Petersburg.

In 2011, Conlan became a Certified Wound Specialist Physician (CWSP), one of only 68 physicians nationwide to achieve the elite designation. Around that time, he began sharing his expertise on wound care on Lillian McDermott's Radio Show.

Most recently, Conlan was named medical director of the Wound Care & Hyperbaric Medicine Center at Health Central in Ocoee, a part of Orlando Health which hired a fresh influx of wound care and hyperbaric medicine staff to accommodate the population spike in West Orange County. This center alone has doubled in volume in the last few months requiring Conlan's expertise.

"We're striving for improved continuity of care between the inpatient and outpatient wound care programs for better patient outcomes," said Conlan. "For example, the doctors and nurse practitioners are promoting the wound healing program before patients are even discharged. Prior to the patient being discharged from the hospital setting, arrangements are made to ensure a smooth transition for their outpatient appointment. Improving communications between all disciplines involved in the patients' care is essential to maximizing our patient outcomes."

Florida Wound Care Doctors are also trained to provide hyperbaric oxygen therapy, a life-saving or limb preserving therapy, and an adjunct component of wound healing. Hyperbaric oxygen therapy (HBO) treats a wide array of patients, including diabetic patients with a Wagner Grade III that have ulcers which show no measurable sign of healing for at least 30 days of treatment, underlying chronic refractory osteomyelitis, osteoradionecrosis, soft tissue radionecrosis, and actinomycosis.

"My foremost desire is to improve the quality of life for my patients," said Conlan. "We're continuing to strive to improve every day with better advanced care."