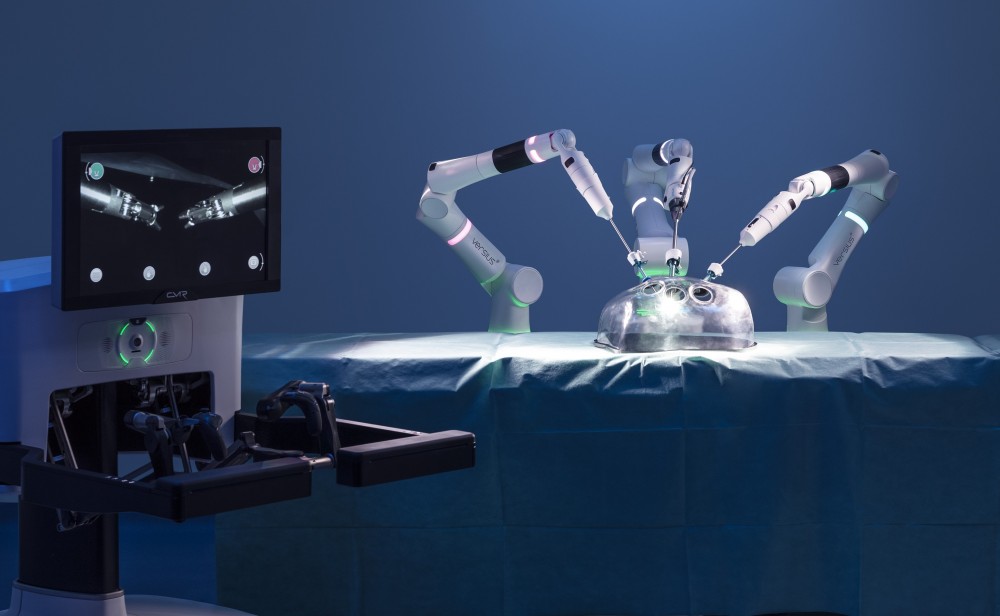 ORLANDO--The AdventHealth Nicholson Center has been participating in early trials of the next-generation universal robot, the Versius® Surgical Robotic System, for minimal access surgery. The robot developed by CMR Surgical is designed to be more versatile and less expensive than existing surgical robots.

“We at the Nicholson Center have had the privilege of working with CMR Surgical on early trials with physicians and OR teams in using the new Versius surgical robot,” said Roger Smith, PhD, Chief Technology Officer at the AdventHealth Nicholson Center, a minimally invasive surgical training facility. “Throughout the late summer and early fall, our trainers worked with CMR’s engineering and education teams to provide instruction to two dozen clinical teams from around the country. In the process, we became experts in using the device and discovered some of its unique capabilities.”

Currently Nicholson is the only medical facility in the U.S. with the Versius system.

The vision behind CMR Surgical, which is based in the United Kingdom, is to make minimal access surgery universally accessible and affordable, transforming the existing market for surgical robotics while also addressing the millions of people who still undergo open surgery each year. The company expects the Versius to reset expectations for robotic surgery by providing a versatile system that is portable, transportable and affordable.

Smith said the design of the arm of the Versius reflects significant improvements.

“We have all become accustomed to robotic systems with arms that are all attached to a single base,” Smith said. “The Versius arms are mounted on independent small bases. Each base has a footprint of just 18” by 18” at the bedside, making it easy for the human team to work side-by-side with the device. It is jointed in a pattern very similar to the human arm. Each arm begins with a shoulder joint, followed by an elbow at the mid-point, and a wrist at the distal end. These make positioning and controlling the arm very intuitive as they match the geometry of a human arm.”

The Versius uses an open surgeon console similar to several of the newer robotic devices that have emerged in recent years. “Both engineers and clinicians expect this design to provide greater situational awareness for the surgeon who is leading activities and directing personnel in the OR,” Smith said.

Previously the surgeon inserted his or her face into a viewing device that brought the images in and took up their whole field of view, which can be a positive visual feature because you feel like you're inside the patient. But Smith said it limits your communication with the rest of the OR team.

“With this open console, the concept is you sit back from a 3D monitor and you certainly see the patient on the 3D monitor, but you also see the rest of the room and you see the operating table and you see the other members of the team,” Smith said. “Several companies right now are exploring this idea of open console and whether it is advantageous to the teamwork that happens in the OR.

Mark Slack, Chief Medical Officer, CMR Surgical, said work began on the Versius in 2014 with the objective of building a better surgical robot by designing a robot to do surgery rather than adapting an industrial robot to do surgery, which is what most of the others have done. They surveyed physicians and asked them what they considered the biggest inhibitors to wider adoption of robotic surgery. The biggest issues were cost, ease of use and size.

Slack said the fundamental differences between Versius and most other surgical robots is that it holds an instrument end on, much as you would hold a knife or a fork, which gives great diversity of movement of the wrist and means a massive arm is not needed.

(See sidebar below on physical stress on surgeons)

“The second fundamental difference is that our instruments don't need to rotate because the wrist of our robot rotates, which means we can make the instruments both simpler and smaller,” Slack said. “So, we can get away with the 5.8-millimeter instruments and it can be cheaper because it has less movement in it. We wanted it small, modular, mobile and versatile, which we do believe we have achieved.”

While the cost of the Versius has not yet been determined, Slack said they aim to get as close to straight stick surgery as they can in price.

One way the Versius could be more affordable is CMR has an option where, instead of selling the robot, the company can negotiate a fee for the use of the robot and all of the necessary instruments and supplies to do a set number of procedures. By paying a fee to use the robot for a year, a hospital doesn’t have to come up with a big capital investment.

“They're hoping that that will create an entree for smaller hospitals that literally can never muster up the millions it takes to get started,” Smith said. “This could also be attractive to countries with nationalized healthcare systems, like in Europe, where they have the same issue. They don't have a system that accumulates revenue so they can buy equipment every year. So, in countries like the United Kingdom and the other EU countries, they're thinking that they will get adoption because it will be more affordable to pay for a year's worth of use of the robot.”

CMR Surgical successfully completed its first series of surgical procedures in humans in May. Thirty laparoscopic procedures were completed as part of a clinical trial at Deenanath Mangeshkar Hospital & Research Center in Pune, India, by Dr. Dhananjay Kelkar and his team. The surgeries consisted of minor, intermediate and major gynecological and upper gastrointestinal procedures. No adverse events were reported as a result of the use of Versius after a 30 day follow up.

“As the first surgeon to conduct a laparoscopic procedure in a clinical setting using Versius, I can say that the system has been shown to be highly effective and has significant potential for bringing minimal access surgery to patients here in India, and around the world,” Kelkar said. “The Versius Surgical Robotic System is flexible and fits easily into our busy operating environment. We have a high demand for surgical care and are committed to bringing the most innovative technologies to our patients.”

Slack said the first in-human series was a significant milestone in bringing Versius to operating theatres around the world.

“These initial results are positive and we look forward to further advancing our mission to bring the benefits of minimal access surgery to everyone who needs it,” Slack said. “This series is part of our drive for the responsible introduction of surgical robotic systems that put safety and effectiveness above all else.”

The company received a European CE Mark in March for the Versius Surgical Robotic System.

Up to a fifth of surgeons in the UK (19 percent), U.S. (20 percent) and Germany (15 percent) predict they are likely to retire early because of the physical strain of conducting minimal access/keyhole surgical procedures, according to a survey of over 450 surgeons across Europe and the U.S. The survey, commissioned by CMR Surgical, recruited general, gynecological and colorectal surgeons who regularly perform laparoscopic surgery, which is proven to reduce pain, scarring and patient recovery time.

Despite having proven benefits, minimal access techniques are not used in almost half of all cases worldwide, with up to 6 million patients globally not receiving the benefits of this type of surgery. The technique can be difficult to conduct and physically gruelling for a surgeon to do, where the surgeon stands in physically difficult positions to conduct procedures including hysterectomy, hernia-repair and colectomy. The survey has revealed that 30 percent of surgeons experienced discomfort during surgery due to the awkward positions undertaken, with three in four surgeons having experienced back pain when performing laparoscopic surgery. In addition, up to 16 percent of surgeons have had to consult with a healthcare professional as a result of musculoskeletal injuries from conducting minimal access/keyhole procedures.

The physical strain of conducting minimal access procedures is further adding to an existing workforce crisis. Many health systems, including in the UK and the U.S., are facing chronic workforce shortages so prolonging the working life of a surgeon is pivotal to the continued delivery of sustainable healthcare. A recent study found that when it comes to the National Health Service, the biggest employer in Europe, over half (53 percent) of senior doctors (consultants) said that there are frequently gaps in hospital medical coverage that raises significant patient safety issues. The picture is similar in the U.S, with a study showing that by 2050 there will be a deficit of over 7,000 general surgeons.

There is a common misconception about what the peak working age is for a surgeon. The survey has revealed that 90 percent of surgeons surveyed believe surgeons reach the peak of their operating ability by the age of 54. However, studies have shown that the peak age for a surgeon is actually 55-60 years old.

According to the survey, one in five surgeons believe they will have to retire early, the equivalent to over 3,000 surgeons in the UK losing key experienced surgeons from health systems that are already stretched.

Commenting on the survey’s findings Adrian Park, MD, professor of surgery at Johns Hopkins University School of Medicine said: “Surgeons of all stripes are reporting musculoskeletal pain and injuries as a result of going to work every day. It is hard to imagine that those responsible for any other workplace, let alone one where the stakes are so high, such as in surgery, would tolerate rates of “worker injury” such as are now being reported by surgeons. Surgeons need to be supported to conduct minimal access procedures sustainably in order to protect the future of the surgical workforce, for the benefit of surgeons, hospitals and most importantly, patients.”

“It is unacceptable that to conduct laparoscopic surgery and offer its benefits to patients and healthcare providers, we neglect the impact this is having on the surgical workforce. Surgical robotics can play a role in extending surgical careers, by allowing surgeons to perform laparoscopic surgery with a choice of ergonomic solutions more typically found in offices across the world.  With a workforce crisis facing health systems around the world, now is the time to act in order to protect our surgical workforce of the future.” commented Mark Slack, chief medical officer at CMR Surgical.