Nursing Homes Have Thousands Of Ventilators That Hospitals Desperately Need

As the number of COVID-19 patients climbs and health officials hunt for ventilators to treat them, nursing homes across the United States have a cache ― about 8,200 of the lifesaving machines, according to data from the Centers for Medicare & Medicaid Services.

Most of the machines are in use, often by people who’ve suffered a brain injury or stroke. Some of those residents are in a vegetative state and have remained on a ventilator for years.

State officials are working to consolidate ventilators where they are most urgently needed. But so far, the supply in nursing homes has not drawn the same attention.

Or course, commandeering those units would set up a monumental ethical dilemma: Do you remove life support for a long-term nursing care patient in order to give a COVID-19 patient a better chance of survival?

The highest number of machines, about 2,300, is in California, where the state has created designated nursing home units for people on life support, officially called subacute units but known pejoratively by some doctors as “vent farms.” New York has the second most, 1,822, according to state officials.

Already, one nursing home on Long Island has lent a nearby hospital 11 ventilators that were not being used, leaving just five for its residents.

“The hospital came to us last week and asked, ‘Do you have any ventilators?’” the nursing home assistant administrator said on the condition of anonymity because he was not authorized to speak to the news media.

“We left ourselves with the bare minimum,” he said. In all, three hospitals reached out to the nursing home for ventilators ― it had to say no to the other two.

New York Gov. Andrew Cuomo has announced an executive order that ventilators not in use by hospitals be redeployed to ICUs. And he’s calling in the New York National Guard to facilitate the order. “We know where every ventilator is,” Cuomo said Sunday.

Nursing home ventilators are not included in his order, but they are included in the state’s tally of the machines.

Dr. Michael Kalafer, a pulmonologist and the medical director at two San Diego subacute units, said he can’t imagine taking one of his patients off a ventilator because it’s needed for someone else.

“I severely doubt we’ll take [a hypothetical] Mrs. Smith off a ventilator because she’s 80 and has been on it for a few years and has not gotten better,” Kalafer said.

But these are precisely the decisions bioethicists are being asked to weigh in on as the country confronts the crush of COVID-19 patients overwhelming the health care system.

And in some cases, states have already decided to give people who are severely brain-injured a lower priority when it comes to access to ventilators. Disability advocates oppose such guidelines and filed complaints with the Department of Health and Human Services last month, according to ProPublica. And although states and health associations can draw up recommendations, they are not legally binding.

“From an ethical point of view, for people who are not conscious, if it’s a matter of removing people from a [ventilator] who are not going to recover, I think it’s a hard decision, but one that in an emergency has to be made,” said Ronald Bayer, a professor of sociomedical sciences at the Mailman School of Public Health at Columbia University.

Bayer has been a member of the World Health Organization and in 2011 served on an ethics subcommittee that advised the Centers for Disease Control and Prevention on the allocation of ventilators in the event of a severe pandemic.

He and several other ethicists said these decisions should not be made at the bedside but by triage committees or people in supervisory roles. And the guidelines ought to be uniform and transparent. That’s why the CDC, the state of New York and medical associations like the American College of Chest Physicians have drafted ethical recommendations for deciding how to ration lifesaving equipment like ventilators in the event of a pandemic.

The California Department of Public Health in 2008 released guidelines to follow during a health care surge: They don’t specifically address ventilator allocation, but rather resources in general. Doctors should consider the likelihood of survival and change in the quality of life as opposed to the ability to pay or the perception of a person’s worth when there are not enough medical resources to treat everyone in need.

When the New York State Task Force on Life and the Law updated its ventilator allocation guidelines in 2015, it considered the question of withdrawing ventilators from nursing home residents, or chronic ventilator patients, to save the lives of those who grow critically ill during a pandemic.

“Are we comfortable sacrificing this group in exchange for saving more lives?” asked Stuart Sherman, the executive director of the task force at the time.

That question drew much debate, but the group ultimately decided that “chronic” vent patients should not be included in the pool when considering how to allocate ventilators during a pandemic. The task force does recommend prioritizing ventilator therapy based on who is likely to survive using a SOFA ― Sequential Organ Failure Assessment ― score.

Cuomo, whose daily televised news conferences have made “ventilators” a household word, is not making decisions based on those guidelines. The task force report is not a binding policy document, according to a spokesperson from the governor’s office.

In the U.S., there are about 62,000 “full-featured ventilators,” the kind needed to treat the most severe cases of COVID-19. An additional 10,000 to 20,000 ventilators are in the government’s National Strategic Stockpile, and 98,000 basic models, the kind often in nursing homes, exist that could be used in a crisis.

In the simplest terms, ventilators push oxygen into the lungs. The machines in ICUs are more powerful and have better monitoring systems than those in a nursing home.

Kalafer’s patients need ventilators to do the work for respiratory muscles. He said they could be used in a pinch during the pandemic. But the real issue is finding enough staff trained to operate and monitor the machines.

Meanwhile, a group of bioethicists, physicians and public health experts are recommending that in a shortage, health care workers could disconnect people from ventilators who have little or no chance of recovery to put them in service of those who do.

The recommendation is the first of six listed in an article published in the New England Journal of Medicine last month.

It did not consider the people who’ve been on vents long term.

“Honestly, before you emailed me, I thought about those patients but never thought about the actual number and how important that might be,” said Dr. James Phillips, one of the paper’s authors and chief of disaster and operational medicine at George Washington University Hospital.

“For patients who have devastating neurological injury and are deemed to never recover and who require ventilation for the rest of their lives, I think it’s an ethical conversation to have with those families to determine if it’s a more appropriate use of resources,” Phillips said.

One ventilator can save multiple lives. The average time a person sick with COVID-19 who needed a ventilator was 11 days, according to an NEJM article that looked at critically ill patients in the Seattle region. Using that number, eight people could potentially be saved over three months.

It is an especially complex moral dilemma when considering the withdrawal of treatment from someone who has lived several years on a ventilator, said Govind Persad, an assistant professor at the University of Denver Sturm College of Law and one of the authors of the NEJM paper.

“A 78-year-old grandmother has been on ventilator support for 5 years in a subacute facility and is expected to remain on it for the foreseeable future. Covid-19 has reached a senior apartment complex nearby, and doctors are looking everywhere for more ventilators,” Persad wrote.

“They think one more ventilator would give them a chance of saving another 78-year-old grandmother in the senior apartments who is growing worse with viral pneumonia, and, once she is off the ventilator, to save some of her neighbors, who are not yet sick but who they expect to be sick in a few weeks.”

Who gets the ventilator?

Persad suggested it should go to the grandmother in the senior apartments because she is likely to need less time on the ventilator, enabling the ventilator to be used to save her neighbors later.

As he put it: “We save her in order to save more lives, not because of quality-of-life judgments.”

The real-life decision is more problematic and heart-wrenching.

Nancy Curcio’s daughter Maria, who was born with a disabling form of cerebral palsy, was on a ventilator as an adult in San Diego for about three months in 2004. She was eventually weaned off the machine but lived the remainder of her life in a nursing home with a breathing and feeding tube, unable to walk or talk. She died in 2017 at age 57.

“I would be very upset if a doctor said I have to take her ventilator away for someone to live,” Curcio said. “But I can understand in triage this is what a doctor has to do. Would I like it? No. I would want to run away with the ventilator.” 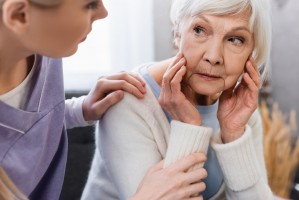