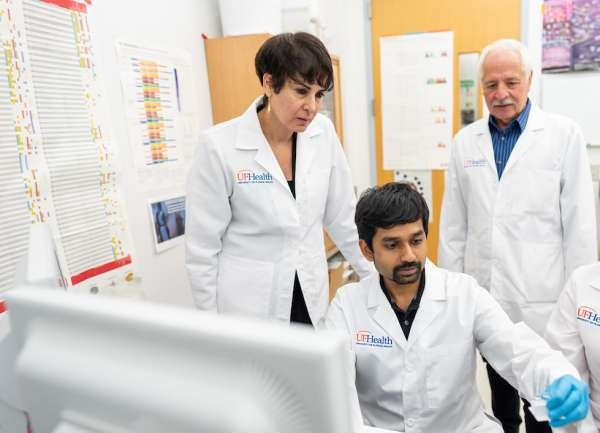 University of Florida neuroscientists have developed a new assay, or test, to detect minute amounts of a protein called tyrosine hydroxylase in blood immune cells of Parkinson’s disease patients, a key finding to aid in the development of a blood test to help diagnose and guide treatment for the neurodegenerative disorder. The findings were published today in the journal npj Parkinson’s Disease.

In a study using blood samples of patients with Parkinson’s disease and a control group, the research team, led by graduate research assistant Adithya Gopinath and Habibeh Khoshbouei, Pharm.D., Ph.D., unexpectedly observed that monocytes of people with Parkinson’s expressed significantly greater amounts of tyrosine hydroxylase, or TH, per monocyte, a type of white blood cell, than those of healthy controls, according to the paper.

“What’s exciting about these findings is they represent a big step forward toward developing a readily accessible and low-cost blood test that potentially could be used in any clinical setting or research lab to help diagnose and guide treatment of Parkinson’s disease and possibly other diseases in which dopamine transmission is dysregulated,” Khoshbouei said.

In addition, the team reported that an inflammatory substance called tumor necrosis factor, or TNF, appears to be linked to a rise in TH expression in human monocytes. TNF has previously been shown to be increased in the brain and peripheral circulation of people with Parkinson’s disease.

Collaborating with the labs of Malú Tansey, Ph.D., co-director of UF’s Center for Translational Research in Neurodegenerative Disease, and Michael Okun, M.D., executive director of the Norman Fixel Institute for Neurological Diseases at UF Health, the team further described that by inhibiting TNF with an experimental drug, XPro1595, TH levels in monocytes return to normal, thus showing a link between inflammation and TH levels in monocytes. XPro1595, or pegipanermin, was co-invented by Tansey and is currently being tested separately in a Phase 1b clinical trial led by INmune Bio and funded by the Alzheimer’s Association.

“It’s clear that innate immune dysfunction is present in a good number of patients with neurodegenerative conditions, not just Parkinson’s, so the impact of these findings is likely to be far reaching,” Tansey said.

The TH-BIO-ELISA would provide an improved method to measure TH levels in peripheral immune cells. The current method, called flow cytometry, is reliable but only semi-quantitative, according to the study. The TH-BIO-ELISA, conversely, is highly sensitive and can quantify picogram levels of TH, Khoshbouei said.

Tansey is a co-inventor on the XPro1595 patent, and is a consultant to and has stock ownership in INmune Bio, which has licensed XPro1595 for neurological indications.