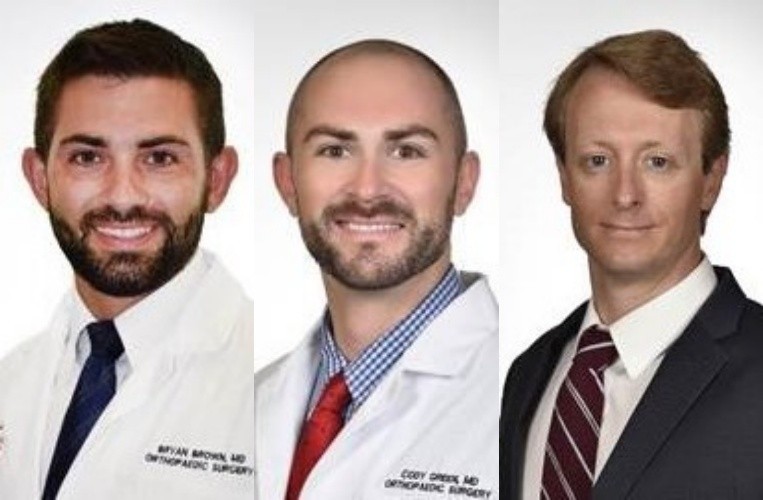 They are three friends and colleagues from different places. They have different sets of experiences and are motivated by different things. And while they each are unique, they share a unifying and intense interest in how some of the most complex bones and joints in the human body work and how to repair those bones and joints when they are broken or failing. Each physician has distinguished himself early in his career. Each has completed a fellowship at a top orthopedic program in San Diego, Houston, or Charlotte. And now they are on the same team at the fast-growing Orlando Health Jewett Orthopedic Institute.

There’s Bryan Brown, MD, from Cocoa Beach, Florida, just a few miles from where rockets still lift off from Earth for space. He likes the challenges of dealing with the complexities of the hand, arm, and shoulder. From the other side of the Florida peninsula comes Pierce Ebaugh, DO, who was influenced by his respected grandfather and who likes to solve puzzles. He specializes in disorders of the lower leg, foot, and ankle. Finally, there’s Cody Green, MD, who as a rough-and-tumble kid growing up in St. Louis, learned to love orthopedic surgeons from his own personal experience. He specializes in total joint replacement and direct anterior hip replacement. He also loves research. They are all passionate about their specialties, their patients, and the community they are now all a part of.

Cocoa Beach is one of those near-legendary places in Florida where soft sand and hard science exist together. Look to the east and you’ll see the Atlantic surf breaking on the shore. Look up and a rocket might be accelerating into orbit from the nearby Kennedy Space Center.

When he was a kid, Bryan Brown, thought he wanted to be an engineer; he liked studying how mechanical parts worked together. As he got older, he became fascinated by the mechanical systems inside people: their bones and joints. And as he narrowed his focus while studying medicine at the University of Vermont, it was the joints in the hand and shoulder that he found most fascinating.

“The anatomy for the hand and shoulder is very complex,” he said. “I like the challenge.”

The pain or loss of motion that comes from an injury or chronic condition can be devastating. “I take the ability for someone to use their upper extremities very seriously. If I can get somebody back to functional use of their hand or arm, I know it will have a huge impact on their ability to live a normal life.”

Brown described a recent case in which a patient had fallen off a ladder and severely injured his shoulder. The solution ended up being replacement of the entire shoulder joint, a very complicated procedure. But, within a few months, the patient was back to full function of the joint.

After earning his medical degree, Brown returned to familiar territory: Central Florida, for his residency in orthopedic surgery at Orlando Health, where the Central Florida Association of Physicians presented him with the Best Resident Award. After that he completed a fellowship at the University of California San Diego for hand and upper extremity.

Brown said the ability to reengage with the networks of friends and colleagues he had established during his residency that made the opportunity to return to Orlando Healthy especially attractive. And he’s extended those networks to the broader community by volunteering his services at Orlando’s Shepherd’s Hope, a group of free clinics for uninsured people. “It’s a way to give back and to address a very serious need in our community.”

Pierce Ebaugh, DO, grew up in Florida’s bustling Tampa Bay area. But it was in the comparatively slow town of Roanoke, Virginia, where his grandfather lived that he would learn how important a doctor can be to a community.

“My grandfather was a pediatrician. And he would take me along with him on errands around town. We would go to the grocery store, and it would take three hours because everybody had to stop and talk to him,” Ebaugh said. “He was just awesome, very old school. Even in the mid-to-late 1990s, he would make house calls.” His grandfather is retired now but he consults with Ebaugh on his greatgrandchildren from time to time.

As influential as his grandfather was and continues to be, it was the riddle of medicine that attracted Ebaugh. It’s also what drew him toward specializing in injuries and disorders of the foot and ankle.

“I like puzzles,” he said. “And a lot of foot and ankle issues are puzzles. Something has failed and there is usually a reason for that. I like to solve things. I don’t want to just make it better; I want to solve it.”

“An orthopedic surgeon can rebuild something and make it look perfect, but the person still has to heal it,” he said. “What goes on with a patient outside the operating room is sometimes more important than what’s going on in the operating room.”

Eager to expand his ability to work collaboratively with other physicians, Ebaugh says he hopes Orlando Health Jewett Orthopedic Institute is seen as a place for all physicians to turn for collaborative help in caring for their patients. “You know, sometimes it seems like we just push a button and send people on their way. That’s not how my grandfather would have me practice medicine.”

The image you might have of someone driven by medical research is of someone with his head buried in a book. With Cody Green, you have someone who as a kid was liable to be buried underneath a bunch of other boys who were trying to tackle him.

While growing up and playing on the football fields, basketball courts, and baseball diamonds of St. Louis, Green managed to break 14 bones. “I think my parents thought something was wrong with me,” he laughed, “but I was just an aggressive sports player.”

In fact, it was while being treated for a broken ankle from a basketball game in the sixth grade that he decided to become an orthopedic surgeon.

Now, after graduating with degrees and honors from Wright State University’s Boonshoft School of Medicine and Miami University in Oxford, Ohio, completing a residency in orthopedic surgery at Orlando Health (where he met Dr. Brown) and then completing a fellowship in adult hip and knee replacement at the prestigious OrthoCarolina in Charlotte, Green specializes in total joint replacement and direct anterior hip replacement. He uses robotic assistance for the most minimally invasive procedures. People who remember long recovery periods with strict rules for how they sat or admonitions against crossing their legs would be astonished by how quickly patients today can resume normal activities.

Green is eager to discuss how he can help care for patients utilizing these technics, but he gets even more excited discussing research and the new fellowship program he is helping design.

“One of my passions is research,” he said. “I am going to be the research chair for the hip and knee department. I am putting together a registry for Orlando Health where we can follow the outcomes for hip and knee patients, so we can use technology and statistics to see what works and what doesn’t work. And we’ll be able to publish and share these findings.”

Green will also be one of the co-directors for a new Orlando Health Jewett Orthopedic Institute fellowship, which will have its first fellow in 2022. Green said he hopes to model it on the OrthoCarolina program he completed.

The fellowship programs that Drs. Brown, Ebaugh and Green completed after their hospital residencies placed them at the sides of expert surgeons for a year of intensive additional training. Besides the practical experience in the operating room, the best of these fellowships help the fellows and their surgical mentors establish a culture of collegiality and professional friendship they cherish today.

“That’s what I want this program to become,” Green said.

Busy as they already are, Brown, Ebaugh and Green are eagerly anticipating the new Orlando Health Jewett Orthopedic Institute which is scheduled to open in 2023. The new 370,000-square-foot institute is designed to become a center of excellence, among the best in the nation. It will be a collaborative center in which patients have access to orthopedic specialists, imaging services, radiologists, and physical therapists, who are all within steps of each other.

Ebaugh may have summed up the hopes and expectations of his colleagues the best: “This will be a place where it’s easy to take care of hard problems.”