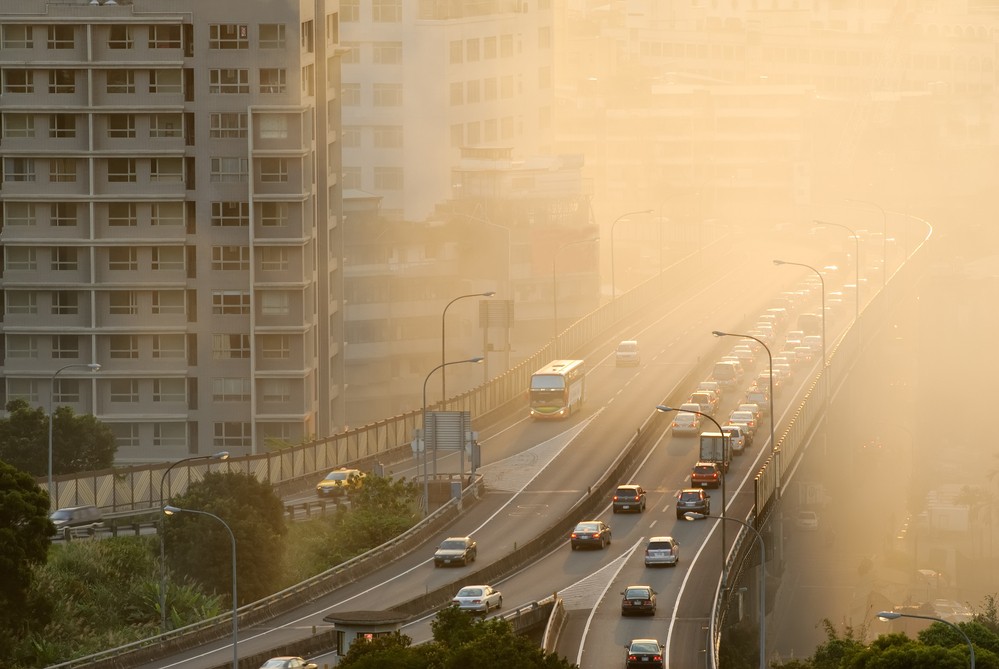 During the past decade, a growing body of research has shown that air pollution harms older adults’ brains, contributing to cognitive decline and dementia. What hasn’t been clear is whether improving air quality would benefit brain health.

Two studies published this year by researchers at six universities and the National Institute on Aging provide the first evidence of such benefits in an older population.

One report, published in the Proceedings of the National Academy of Sciences, found that the risk of dementia declined significantly in women 74 and older following a decadelong reduction in two types of air pollution: nitrogen dioxide, a gaseous byproduct of emissions from motor vehicles, industrial sources, and natural events such as wildfires; and fine particulate matter, a mix of extremely small solids and liquids arising from similar sources.

Both studies are national in scope and account for other factors that could affect results, such as participants’ socioeconomic status, neighborhood characteristics, preexisting medical conditions, and lifestyle choices such as smoking.

What might explain their results? “We think that when air pollution levels are reduced, the brain is better able to recover” from previous environmental insults, said Xinhui Wang, an assistant professor of research neurology at the University of Southern California’s medical school. This hypothesis needs to be examined further in animal studies and through brain imaging, she suggested.

There are several theories about how air pollution affects the brain. Extremely tiny particles — a human hair is at least 30 times as large as the largest particle — may travel from the nasal cavities to the brain via the olfactory (smell) system, putting the brain’s immune system on high alert. Or, pollutants may lodge in the lungs, causing an inflammatory response that spreads and leads to the brain.

Also, pollutants can damage the cardiovascular system, which is essential to brain health. (Links between air pollution, stroke, and heart disease are well established.) Or tiny particles can cross the blood-brain barrier, wreaking direct damage. And oxidative stress may occur, releasing free radicals that damage cells and tissue.

Older adults are especially vulnerable to air pollution’s harmful effects because of reduced lung capacity and pollutants’ potential to exacerbate conditions such as respiratory illnesses and heart disease. Also, air pollution’s effects accumulate over time, and the longer people live the more risks they may encounter.

Yet recognition of the potential cognitive consequences of air pollution is relatively recent. Following several small studies, the first national study demonstrating a link between air pollution and cognition in a diverse sample of older men and women was published in 2014. It found that seniors living in areas with high levels of fine particulate matter were more likely to experience cognitive problems than people living in less polluted areas.

Another study, published a couple of years later, extended those findings by reporting that air pollution’s cognitive effects are magnified in older adults living in disadvantaged neighborhoods where pollution levels tend to be highest. The chronic stress that residents of these neighborhoods experience may “increase the rate at which neurons are damaged by toxic challenges,” the authors wrote.

Air pollution is only one of many factors that influence cognitive decline and dementia, researchers agree, and results of this kind establish associations, not causation.

Newer research suggests that older adults’ cognition is affected even when exposures are below standards set by the Environmental Protection Agency. “With older adults, there really is no level at which air pollution is safe,” said Jennifer Ailshire, an associate professor of gerontology and sociology at the University of Southern California.

“It’s important to keep on reducing the standards for these pollutants,” said Antonella Zanobetti, principal research scientist for environmental health at Harvard’s T.H. Chan School of Public Health. With colleagues, she has a National Institute on Aging grant to study how air pollution affects the risk of Alzheimer’s disease and related dementias among Medicare beneficiaries. In 2019, her work showed that higher levels of fine particulate matter are linked to more hospitalizations among older adults with dementia — a marker of disease progression.

Last year, in one of the largest U.S. studies to date, a different set of researchers examined the link between long-term exposure to fine particulate matter and nitrogen dioxide among 12 million Medicare beneficiaries with diagnoses of Alzheimer’s disease and other forms of dementia. Exposure to high levels of these pollutants appeared to accelerate cognitive decline that was already relatively advanced, leading to an increase in diagnoses, researchers concluded.

In addition to population-wide studies, nearly 20 scientific laboratories across the world are studying how air pollution contributes to dementia in animals. At USC, Caleb Finch, a professor who studies the neurobiology of aging, is co-principal investigator for a five-year, $11.5 million grant from the National Institute on Aging to study how air pollution in urban areas informs the risk of dementia and accelerated brain aging.

Among the questions that Finch said need to be addressed are: Which areas of the brain appear most vulnerable to air pollutants? When are people most at risk? How long does the damage last? Is recovery possible? And do lifestyle interventions such as diet and exercise help?

“The main point is we now realize that Alzheimer’s disease is very sensitive to environmental effects, including air pollution,” Finch said.

Recognizing this, the Lancet’s Commission on Dementia Prevention, Intervention, and Care in 2020 added air pollution to a list of modifiable risk factors for dementia and estimated that up to 40% of dementia cases worldwide might be prevented or delayed if these risk factors were addressed.

For her part, Ailshire is optimistic that public policies can make a difference. From 2000 to 2019, she noted, average annual fine particulate matter pollution decreased 43% nationally due to efforts to improve air quality. “I’m very hopeful that these efforts will continue,” she told me.

What can older adults concerned about air pollution do on their own?

On very hot days, go for a walk in the morning instead of the afternoon, when ozone levels are higher, said Dr. Anthony Gerber, a pulmonologist at National Jewish Health, a medical center in Denver specializing in respiratory diseases. Ozone, a toxic gas, is formed when various chemicals interact with sunlight and heat.

If you live in the western U.S., where wildfires disseminating fine particulate matter have become more common, “wear a KN95 mask” on days when fires are affecting air quality in your area, Gerber said. Also, if you can afford it, consider buying air purifiers for your home, he advised, noting that fine particulates can get into homes that aren’t well sealed.

To check air quality levels in your area, go to AirNow.gov, Ailshire recommended. “If it’s a high-risk day, that might not be the day to go out and do heavy yardwork,” she said.

But don’t stay inside all the time and become overly self-protective. “It’s really important for older adults to be outside and exercise,” Gerber said. “We don’t want seniors to end up sick because they’re breathing lots of particulates, but we don’t want them to become inactive and stuck at home either.”