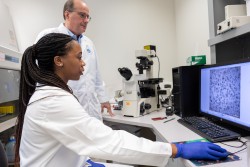 Thomas Schmittgen, Ph.D., pictured back, leads a team of scientists that have discovered a way to reverse a key cellular process involved in the progression of pancreatic cancer.