Two heads are better than one, the saying goes, but in this case a collaboration of three investigators, each specializing in a different herpesvirus, proved to be far more than the sum of its parts.

By pooling resources in virus generation and computing in two labs at the University of Florida and one at Tulane University, the team discovered similarities in how two human herpesviruses and a mouse herpesvirus create genetic changes that can cause cancer.

The team confirmed similarities in how small RNA molecules called microRNAs and another type of RNA molecule called long noncoding RNAs contribute to tumor development in all three herpesviruses. By finding these overlaps, the team revealed for the first time that human herpesvirus-encoded noncoding RNAs can be studied in a natural animal model. Previously, these studies could be done only in laboratory models because of the different ways the viruses replicate in animals and humans.

Now, the team can begin a new phase of research using human tumor samples to further study the two human herpesviruses, Kaposi’s-sarcoma associated herpesvirus, or KSHV, and the Epstein-Barr virus, or EBV. These viruses typically lie dormant, but they can cause cancers such as Kaposi’s sarcoma and lymphomas in people with immune deficiencies, including HIV. 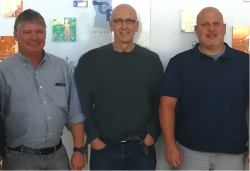 “Our original hypothesis was that we could learn so much more about the role of noncoding RNAs if we studied them in more than one virus at the same time,” said Rolf Renne, Ph.D., a professor in the UF College of Medicine’s department of molecular genetics and microbiology and associate director of basic sciences at the UF Health Cancer Center. “We showed that we can use a mouse model to learn more about the human viruses. Now, we can ask the question: ‘Is this true in humans too?’ Our ultimate goal is to find vulnerabilities of these tumors related to noncoding RNAs, which could lead to a cancer therapeutic targeting RNAs.”

Renne oversees the project, which began with a $6.5 million grant from the National Cancer Institute, or NCI, in 2017. He is collaborating with Scott Tibbetts, Ph.D., an immunologist and a professor in the department of molecular genetics and microbiology at UF who studies the murine herpesvirus 68 in mice, and Erik Flemington, Ph.D., a bioinformatics expert and professor at Tulane who studies EBV.

The team’s success in the first phase led the NCI to recently renew their funding for another five years and to increase the award to $7.5 million. In the next phase, samples will be collected from a clinic at Louisiana State University that treats HIV patients who have gastric cancer, lymphoma or Kaposi’s sarcoma caused by the herpesviruses. Samples will also be collected from patients with AIDS in South Africa, where Kaposi’s sarcoma is the most common cancer in men. The team has recruited a new expert at the Cleveland Clinic to study the samples.

The structure of the NCI Program Project grant was critical to the project’s success, essentially creating a pipeline of shared resources and high-speed computing between the two universities. Internal and external oversight committees with leading experts in the field, including a Nobel Prize recipient, ensured the team’s data met the highest possible standards. Thanks to additional funding from UF, the group added a training focus, extensively involving trainees including undergraduates, graduate students and postdocs in all research hubs and hosting hands-on workshops and retreats.

“The nature of these projects is to accelerate research, and we have done that tremendously,” Renne said. “If we had stayed in our silos and done these experiments independently without the opportunity to constantly compare our data, we would not have been able to create our new hypothesis.”