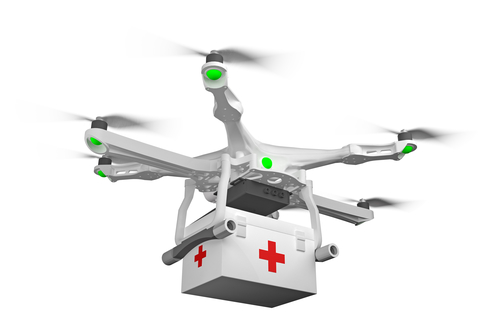 Drones: The missing link in cardiac arrest's chain of survival

Three hundred fifty-six thousand: This is the frightening number of people in the United States who are affected by Sudden Cardiac Arrest (SCA) each year. Now, take into consideration that SCA's mortality rate is roughly 90 percent. Close to a daunting 320,000 men, women, and children, lose their lives in the United States each year due to SCA alone - this isn't an insignificant problem.

Despite the proliferation of nearly 2.4 million publicly accessible Automated External Defibrillators (AED) alongside increased efforts to spread SCA awareness and treatment education, this mortality rate has remained stagnant over the past 30 years. The current "Chain of Survival" explains a few, seemingly simple steps for successful treatment: recognize cardiac arrest, perform early CPR, provide rapid defibrillation, have effective advanced life support, and receive integrated post-cardiac arrest care. Following these steps will increase the likelihood of survival to upwards of 66 percent. So why the stagnant mortality rate? What's missing? Why so much death?

SCA must be recognized quickly, CPR must be performed immediately, and an AED shock must be swiftly administered because for every minute without defibrillation the chance of survival decreases nearly 10 percent. The devil lies here, in this crucial detail - swift defibrillation. The initial steps in SCA treatment have very few variables: Do you have a phone to dial 911... Yes/no? Can you perform CPR...Yes/no?

The process of swift defibrillation however, has enormous amounts of variability, and thus, is the most inconsistent and time-consuming: Is there an AED? Do you know its location? Where at that location is the device stored? Do you know where you are relative to that location? Is it close enough to retrieve quickly? Do you have the stamina to run there and back? Should you stop CPR to retrieve it? Can you contact someone who is closer? How do you contact them? How do you explain where you are to that individual? The list goes on... Take for example a golf course with an AED in the club house; Do you know the club house phone number? Are you calm enough to find that number? What hole are you on? Each one of these variables further opens the door to inconsistencies, time, consumption, and death. There is a fatal incongruency between the assumed simplicity of "swift defibrillation" and the reality of today's current, stationary AED implementation paradigm. The good news: The abundance of LTE networks, smart phones, IoT cloud infrastructure, and today's general climate of connectivity, when paired with the advancements in Multi-rotor Small Unmanned Air System reliability and performance has positioned us for a paradigm shift. Stationary, mounted AEDs are no longer the only implementation option. The era of dynamic, movable, intelligent AED implementation is upon us.

Should we eliminate the variables and inconsistencies surrounding AED retrieval and instead, simplify the process, defibrillation would be quicker, and the rescuer can shift his/her focus on performing effective CPR.

Enter the utilization of small Unmanned Air Systems (drone/SUAS). SUAS are extremely athletic and programable pieces of robotic hardware capable of transporting a plethora of medical equipment such as Narcan, tourniquets, and importantly AEDs, quickly over large geographical areas. The concept of strapping an AED to a drone is not a new one. In fact, it's a rather obvious solution - SUAS can fly quickly, over infrastructure, and directly to a victim in need.

I refuse to patronize the readers of this article with the argument that SUAS can help solve this problem...because, for reasons stated above, of course they can. Instead, I want explain why this solution is viable right now, and more importantly how.

It may seem counter-intuitive, but I am often frustrated by people's infatuation with the vehicle itself. Today's SUAS are jam packed with advanced Flight Controllers, Electronic Speed Controllers, "smart" Lithium Polymer power supplies, accurate GPS units, sense/avoid sensors, and are stably conducted by powerfully effective flight algorithms called P.I.D.s. These vehicles are reliable, have redundancies on almost every component, and do exactly what they are told. Given this information, lets hold the vehicle to the side and assume it will perform as expected.

Instead, lets focus on a lesser considered detail; the actual deployment of SUAS - how do we enable these vehicles to effectively be used within the time crunch of a SCA event? In order to effectively utilize SUAS for this purpose and to enable rapid/immediate deployment, the system needs; a network connect housing solution, a reliable vehicle, an on-vehicle LTE enabled computer, a robust monitoring and alerting system, a dynamic routing solution, and (very important) an easy to use and affordable activation medium that the general public has access to.

Off the bat, this list sounds fairly complicated...and it is, but with 320,000 annual deaths sitting on the other side, this type of solution is brutally necessary. The common denominator underlying all of these requirements is connectivity; we must be able to "communicate" (be it digitally) through the entire process- from lay rescuer to flight controller. Fortunately, today's existing communication infrastructure already facilitates this type of communication every day; whether it be your iPhone controlled garage door opener, or the smart lock on your front door, the Internet of all Things already utilize a persistent connectivity to communicate from end-user to edge-device.

Cognitive consideration must shift from an infatuation with "sexy" flying "drones", and instead, narrow in on the process and solutions that are necessary to define a SUAS as a network connected edge device. Doing so will make it rather apparent that when your golfing partner collapses, a single app on a smart phone can enable these athletic machines to safely and immediately transport an AED directly to friend in need. The network infrastructure is in place, the technology is primed and ready, and with a cardiac arrest death every 1.6 minutes my only question is... What are we waiting on?

Gordon Folkes is the CEO/Founder of Archer First Response Systems, an Orlando Based technology company. Archer First Response Systems is a suite of integrated components that form an end-to-end solution for immediate small Unmanned Air System (drone) deployment. The system enables the athleticism of Multi-rotor Small Unmanned Air Systems (SUAS) (drone) to immediately transport an Emergency First Response Payload that can consist of an Automated External Defibrillator, CPR Mask, Narcan Nasal Spray and other first response medical equipment. The system is capable of transporting its payload over 11 square miles in 3 minutes or less but is not limited to a 11 square mile coverage area. The system can be activated via 911 Dispatch CAD system or by a smart phone mobile application. Archer First Response Systems LLC installs, programs, proactively maintains, remotely monitors, and resets our systems in their entirety- effectively providing a turn-key First Response Small Unmanned Air System Deployment solution to decrease EMS dispatch times and cardiac arrest fatalities. Folkes can be reached at gfolkes@archerfrs.com

How Has the COVID-19 Pandemic Impacted the Diagnosis of New Cancers?