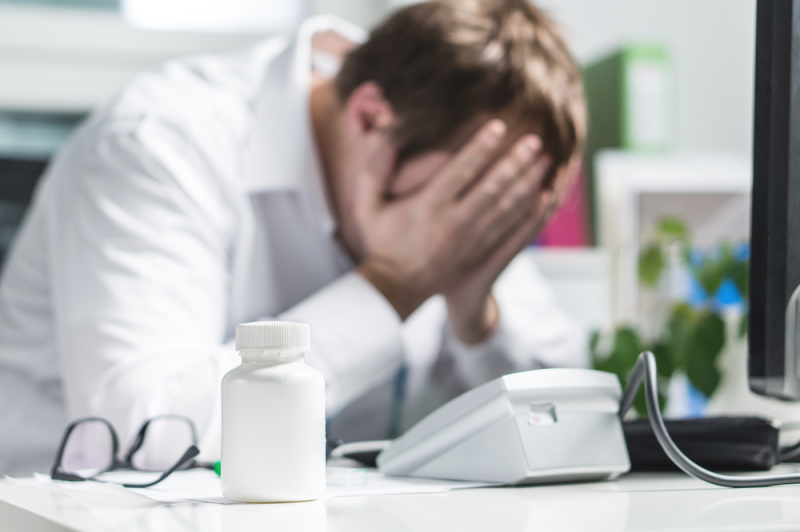 "It's prudent to keep in mind that the first reaction to seeing canaries perish in a coal mine wouldn't usually be to send out for tougher canaries." Gary Price, MD, president of The Physicians Foundation.

Three of four doctors have suffered burnout, a much higher rate than a few years ago when a perfect storm of changes rocked the healthcare industry. Compared nationwide, Florida physicians experience burnout more frequently than their counterparts.

"It's sobering," said Gary Price, MD, president of The Physicians Foundation, a nonprofit group that published the 2018 Survey of U.S. Physicians, with nearly 9,000 physicians weighing in. "The career plans and practice pattern trends revealed in this survey will likely have a significant effect on our physician workforce, and ultimately everyone's access to care."

According to the sixth biennial survey by national physician search firm Merritt Hawkins, the problem is so severe that 31 percent of Florida doctors say if they had a do-over, they wouldn't choose the same profession, and more than half say they would not recommend medicine as a career to their children. Even more disturbing: 46 percent of respondents plan to change career paths.

Much is to blame. The most frustrating problem, a vast majority of doctors say, is the inefficiency of a system created for efficiency: electronic health records (EHRs). They're unhappy about the inefficient EHR design and interoperability; nearly half the respondents said EHRs have reduced or detracted from their interaction with patients.

Other least satisfying career factors: insurance and regulatory burdens, professional liability concerns, and erosion of clinical autonomy. These problems may contribute to doctors being slow to adopt telemedicine, with only 17 percent practicing some form of it.

"The evidence points to the need for a major effort on the part of all the partners in the healthcare industry to re-examine the electronic health record as a tool for improving physician's abilities to provide care, and re-inventing it for that purpose," said Price.

Clinical-wise, social problems - addiction, poverty, unemployment, homelessness - that make it difficult to treat patients also frustrate physicians. In fact, 81 percent of Florida doctors say their patients are impacted by a social situation that poses a serious impediment to their treatment of care.

"It's distressing that such a high number of patients are dealing with one or more social situations that are detrimental to their health," said Walker Ray, MD, who chairs the foundation's research committee. "These challenges directly impact a physician's ability to deliver effective care, and the cost implication of these issues is enormous."

Perhaps because of those circumstances, a vast majority of patients consistently don't adhere to their treatment plans; 31 percent don't follow plans at all.

"More patients with complex and chronic diseases cannot follow through on care recommendations due to limited finances and unpredictable living situations," said Dr. Russell Libby, board member of the Physician's Foundation. "Physicians like to see their patients get better. When it's diminished by social determinants, they may experience a sense of futility, failure and be more susceptible to burnout.

"It's one of the many heavy feathers accumulating on the backs of physicians and may be the one that breaks some of them."

These factors contribute to an overall 40 percent of doctors planning to retire or cut back on hours within the next three years. The largest group of respondents? Aged 56 to 65.

"The frustration and diminished sense of accomplishment associated with burnout almost certainly contributes to the large numbers of physicians reporting plans to diminish work hours or retire earlier than anticipated," said Price.

The accelerated growth of hospitals acquiring physicians has also taken a toll. Only 12 percent of respondents agree it's a "positive trend likely to enhance quality of care and decrease costs." To that end, 35 percent describe hospitals employing physicians in a "somewhat negative and adversarial" light.

"In our survey, 52 percent of employed physicians reported very or somewhat positive feelings about their morale in general, compared to only 37 percent of independent physicians," said Price, noting that only 31 percent of respondents are in private practice, down from 48 percent in 2014.

Libby pointed out it's important to find ways to engage physicians in the discussion about burnout.

"We need to have ways to screen, and vehicles to offer once an individual has been identified, and especially when they're reaching out for help," he said. "We need to build systems that address the myriad causes ... and build evidence-based solutions to sustain the careers and productivity of our medical professionals."

Price expressed concern about symptoms of burnout being directly related to medical errors, lower quality measurements, and lower patient satisfaction, adding that medical organizations have developed programs to provide tools for physicians to identify burnout symptoms, identify pathways to treatment, and strategies to attempt to avoid it.

"Practicing physicians are the leaders of our healthcare system, yet their voices are often not heard," noted Tim Norbeck, CEO of The Physicians Foundation.

But only partial solutions can be offered.

"If the root causes aren't addressed, the problem will not go away," said Price. "It's prudent to keep in mind that the first reaction to seeing canaries perish in a coalmine wouldn't usually be to send out for tougher canaries."

RESPONSES FROM THE STATE OF FLORIDA

Courtesy of The Physicians Foundation and Merritt-Hawkins

What are fellow physicians' priorities?

Which factors are most satisfying about practicing medicine? Relationships with patients and intellectual stimulation. Perhaps surprisingly, the profession's financial rewards ranked a distant third, while the prestige of medicine landed last on a list that includes interaction with colleagues and social impact on the local community.

How Has the COVID-19 Pandemic Impacted the Diagnosis of New Cancers?