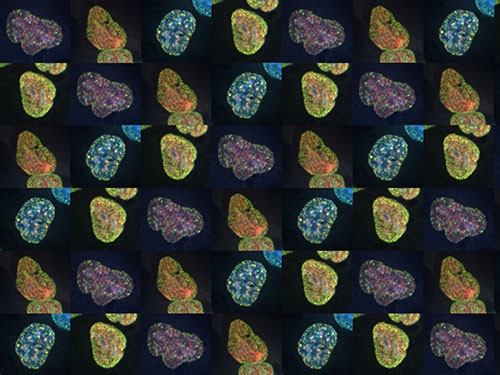 This research image shows DNA replication in cells with and without mutant DNMT3A. The green and red colors represent cells that were killed by the drug. Yellow indicates cells that repaired their DNA damage and kept growing.

GAINESVILLE, Fla. — In the battle against one type of leukemia, a genetic mutation could hold the key to more effective, lower-dose treatments. The new, early findings by University of Florida Health researchers and their colleagues are especially relevant for older or frail patients who may not be able to tolerate high-dose chemotherapy.

The findings center on acute myeloid leukemia, or AML — a blood and bone marrow cancer that is one of the most common types of leukemia. About one-fourth of AML patients carry a mutation in a gene known as DNM3TA. That mutation can make patients less responsive to certain chemotherapy treatments.

Working in cell and preclinical models, a UF Health-led research team has made an important discovery: Those who carry the genetic mutation might benefit from anti-cancer drugs that interfere with the way AML cells replicate. The researchers also have early evidence that the anti-cancer effect can be amplified with novel drug combinations.

The findings published Oct. 29 in the journal Clinical Cancer Research are a potential breakthrough in personalized medicine for AML patients, said Olga Guryanova, M.D., Ph.D., an assistant professor in the UF College of Medicine’s department of pharmacology and therapeutics and a UF Health Cancer Center member. The idea is to match patients’ individual genetic profile to a potentially more effective chemotherapy regimen. The researchers also found a way to perhaps make patients of all ages more responsive to lower-intensity treatments.

“High-intensity leukemia treatments can be very hard on patients. So, if we can find a way to take a lower-intensity treatment and sensitize the cancer to it, that would also be beneficial to patients,” she said.

The researchers found that compared with non-mutant cells, human leukemia cells with the DNM3TA mutation were more sensitive to a chemotherapy medication (cytarabine) that stalled the disease. In a group of mice with a similar genetic mutation, the same medication was found to reduce the number of leukemic blood and bone marrow cells compared with animals that did not receive the treatment. Taken together, the results suggest a therapeutic avenue for slowing down the replication of acute myeloid leukemia cells, the researchers determined.

Because cancer cells can grow quickly, interfering with the way AML cells synthesize their genetic material is one way to stop or slow the disease, Guryanova said.

“If the cells that regrow the cancer can be inhibited, then there is a higher potential for success for the patient,” she said.

The research team also wants to know more about combining the chemotherapy medication with another substance that keeps cancer cells from repairing their damaged DNA, causing them to die. The next step is to secure funding and approval to conduct a clinical trial in humans. Ideally, that could lead to a personalized, low-intensity chemotherapy regimen that might be available mostly on an outpatient basis, Guryanova said.

Funding for the research was provided by the National Institutes of Health, the Ocala Royal Dames for Cancer Research, the Harry T. Mangurian, Jr. Foundation and the Thomas H. Maren Junior Investigator Fund. Scientists from the Austrian Academy of Sciences and the Medical University of Vienna collaborated on the work.